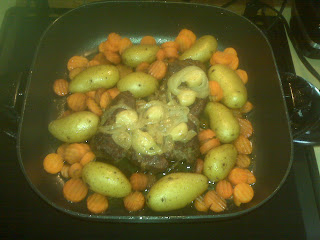 This is a test. Literally a test.

Meaning I'm testing the following recipe as I type. It's a test because I initially purchased a 3 lb. chuck roast and cut it in half creating two 1 1/2 lb. chuck roasts. I cooked the first half of the roast in a crockpot

a couple of weeks ago and it turned out fine. It actually fit better in my older model round 3 qt crockpot that way.

These days it's just DH and myself so having boatloads of leftovers gets rather old. With Thanksgiving rapidly approaching and due in just days, there won't be much room for leftovers either.

Ok, enough of the rambling. On with the test...


Heat the skillet to 425°. Once the skillet is hot add the oil. When you see the oil beginning to ripple or dance around somewhat, lay the chuck roast fat-side down in the oil and brown. Turn to brown the other side. This step takes about 10-15 minutes total.

Salt and pepper each side. Lay the 1/2 stick of butter, onion slices, and garlic clove halves on the roast. Cover and lower the temperature to 225°. Let it simmer for 15 minutes per 1/2 lb turning halfway through to evenly cook throughout. Using a meat thermometer, check to make sure the internal temperature reaches at least 145°. Add a little water if the roast begins to scorch.

Add veggies of your choice around the roast. I added small gourmet potatoes and frozen carrot slices. Cover and continue cooking at 225° until veggies are tender.


Have you tried this or something similar? How did it turn out for you? What mods do you suggest?
Posted by Angela at 2:53 PM No comments: