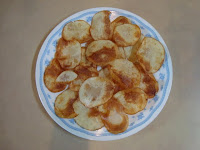 Mmmmm, homemade potatoe chips. No, I couldn't have just one either. These were so good and so easy to make with my Swissmar Borner V-Slicer Pro Mandoline V-4000, 7-Piece Set 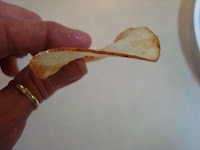 I fried these up in a cast iron skillet with about 1/2 to 3/4" deep oil in it. I've also made them in the microwave which, of course, are less fattening. But, hey, sometimes ya gotta let it go, ya know?
To do so in the microwave, simply:
I haven't tried oven baking them yet, but all that would entail would be spraying and laying them out on a baking sheet and baking in a 350° oven.

Now  I just wish I had a V-Wave Waffle Slicer

for making ripple potato chips to go with French Onion Dip from Scratch.
Posted by Angela at 2:03 PM No comments: